The beauty of African identity is fabricated in her unique attires. Before suit and tie, Africans walked majestically in kilts, skirts, cloaks, shawls, and some dresses including gowns and aprons.

Due to inadequate documentation of historical records, the evolution of African clothing becomes difficult to trace. However, with oral tradition, paintings and sculptures, theatrical performance and artifacts representing how old age Africans dressed, the culture has been fully preserved till date.

In ancient Egypt where civilization appeared after Mesopotamia (now Iraq), clothing has been a thing from the end of the Neolithic period (prior to 3100 BC) to the fall of the Ptolemaic Kingdom with the death of Cleopatra in 30 BC.

Unlike other parts of the world, Africans in most areas did not wear clothes against harsh weather. The climate is warm but hospitable. We’ve all seen Egyptians keeping their cool while in the hot desert 🙂

In some areas, Africans simply wore nothing or little to cover the private regions of their bodies. They fashioned these coverings from animal skins and bird feathers. In some areas, face and body painting was part of fashion aside rituals.

Before the arrival of ships at the coasts of Africa, clothing innovations have been in motion. They brilliantly devised technologies and techniques to produce their own clothes engraved with a special design or pattern pointing to the origin of the people and their indispensable culture.

One of the earliest evidence of textile clothing in Africa can be traced to Igbo-Ukwu in the 9th century made from bast-fibre. And by 11th and 12th century, the discovery of Tellem caves in Mali led to the finding of fragments of cotton and wool fabric dyed with indigo at funerary sites. When trade started between Africa and other continents in the 15th century, there was an infusion of clothing culture. The use of buttons on garments became one of this development including beads and shells on garments.

This wasn’t much of a development in some parts of Africa like Egypt where clothes have been adorned with precious stones and jewels since time started ticking.

Different techniques evolved across the continent. Africa is known for her weaving technique as well as the tie-and-dye style for coloring and creating patterns.

With about 3000 tribes from 54 nations, each tribe in Africa has its unique clothing signature and royal in its own right. It would take the whole quills in the world to write about them.

Here, we would talk about the most popular clothing styles in Africa:

Ankara is one of the colorful cotton cloths in Africa. They are industrially produced with batik-inspired printing. The designs are unlimited and tirelessly manufactured to serve peoples’ taste. Using a manual or an electric-powered tailoring machine, different designs can be combined to sow beautiful clothing styles for both sex. Some tops and pants can be worn for formal and informal occasions.

Danshiki is a popular loose-fitting garment designed for the top half of the body usually paired with drawstring pants. It is colorful and has a cotton feel. You can find danshiki in West Africa, East Africa, and other regions of Africa. It is known as “Kitenge” in the East. There are different styles for both formal and informal events.

This is another type of danshiki often paired with matching pants and a long rope covering the outfit. They come in different sizes and colors used for different functions.

Kente is originally from Ghana. It is made from silk and cotton with an interwoven cloth strips pattern.

Kaba is a combination of a skirt and a matching blouse made from African wax print. The skirt is achieved by wrapping the material around the waist holding it together using a pair of strings or simply a zip.

Yoruba is a complete dressing code from head to toe consisting of a hat, agbada, buba, and an embroidered pant in most cases. The name identifies with the Yoruba people of Nigeria known for this clothing style.

This is also a common style known with the Hausa people with little difference in material and hat designs. The agbada of Yoruba is babanriga of the Hausa dressing code. The abgada or babanriga (meaning big cloth) is usually a large material covering the buba and pant.

However for such a combination, an African Bariga can be an alternative. African Bariga is a similar outfit but with a long-sleeved shirt and a flowing buba.

With the fusion of African clothing culture with foreign cultures, today’s outfit has a touch of hybrid dressing styles which can be worn to work, to the club or casually at home.

Ankara among others comes in different funky styles now. These outfits include pencil dresses, “crazy” jumpsuits, stylishly ripped pants, playsuits, and many more styles you could think of.

Still on that funky style, couples don’t walk around wearing everyday kitenge, kente and ankara any more. They do so now in innovative tops combined with Western, American, Middle Eastern and other styles. And also other African styles are merged to come up with one. What can be more Afro-centric?

Where to Find African Clothes

The world has greatly improved with advanced technology. Wherever you are within or outside Africa you can find African clothes at your fingertips online.

Wannna try one of those traditional or funky African styles? We got you covered.

Visit our online store to find unique African clothes and other elegant products.

POETRY: Who Told Boys To See Themselves Higher

ZAHRA' LANGHI: The Fight Against Political Factions of Libya 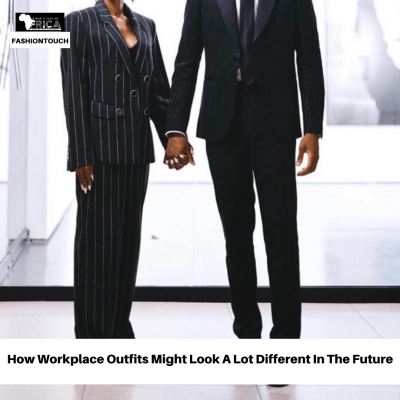 How Workplace Outfits Might Look A Lot Different In The Future